Industry fund Equipsuper has confirmed its merger with the Rio Tinto Staff Superannuation Fund in a move that will double its funds under management to $14 billion.

Equip and Rio Tinto Staff Super have completed due diligence in relation to merger talks announced in February 2017 and will merge on 1 July 2017.

The merged entity will retain the Equip branding and have total membership of over 75,000, as well as funds under management of $14 billion.

The member directors of the merged entity will be Jan Dekker, Pippa Leary and Jane Simon; the employer directors will be John Azaris, Mark Cerche and Michael Clinch; and independent directors Andrew Fairley (also chair), Justine Hickley and Wayne Walker.

Equip chair Andrew Fairley said Mr Vamvakas had successfully guided the fund through the negotiations with Rio Tinto Staff Super the led to the merger.

"Our existing and incoming trustee directors are very pleased to be able to assure our members, employers, staff and key industry partners of the continuity and proven leadership qualities that he brings to the fund," Mr Fairley said.

"We have established a clear and unique position in the corporate superannuation marketplace, which bridges the gap between profit-for-member industry funds and retail master trusts." 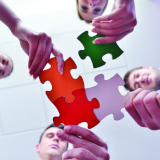