Trade is being used as a weapon in political spats across the globe, according to a report from State Street Global Advisors.

Two of Australia’s most lucrative trading partners, South Korea and Japan, are locked in a politically motivated trade war, which has seen Japan remove South Korea from its export whitelist while tightening export restrictions on materials key to the production of display panels and semiconductors for smartphones.

South Korean companies will now need to go through an extended approval process that will strain supply chains for tech giant Samsung and which could have a follow-on effect for the entire tech supply chain.

Japan accounts for 12.7 per cent of Australian exports, while South Korea takes in 5.9 per cent.

The trade war has its roots in the complicated history between the countries, which started when Japan annexed Korea in 1910 and culminated during World War II, when tens of thousands of Koreans were used as slave labour by Japanese companies like Mitsubishi.

In 2013, a South Korean lower court ruled that Japan must pay reparations to Koreans who were used as slave labour by Japanese companies during WWII, contravening a 1965 treaty that declared all financial claims between the two countries settled.

Neither country has officially stated that these historical tensions are the reason for the trade war, with Japan instead citing poor management of exports from South Korea and claiming that materials had accidentally been shipped to North Korea. However, the dispute is coloured by nationalist tension with protests in South Korea calling for a boycott on Japanese-made goods.

The Reserve Bank of Australia (RBA), in statements accompanying their rate cuts earlier this year, cited global geopolitical upheaval as one of the reasons for slow economic growth, and a further increase in tensions could see the RBA slash rates below 1 per cent in the coming months.

The ongoing trade war between the United States and China also has the potential to push the Australian dollar below 60 cents, driving investor interest into bonds and gold.

Trade is being used as a weapon in political spats across the globe, according to a report from State Street Global Advisors. 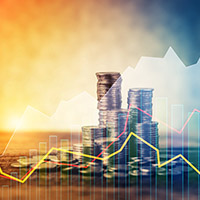