86 400 has become the first neobank to launch its products to the general public, offering consumers both a savings and transaction account.

86 400 was granted a full license by APRA in July and was the first neobank to skip the restricted ADI route and go straight for the full license.

Now, less than two months after being granted its licence, the neobank has launched its “Pay” and “Save” accounts and its app is already poised to take advantage of the upcoming open banking regime.

The app allows customers to connect all of their financial accounts, allowing a read-only look at a consumer’s entire financial landscape on the one app. This includes credit cards and home loans.

“Managing your money shouldn’t be so hard, but the simple fact is that staying on top of your finances has become too complex, leaving many Australians feeling anxious, stressed and frustrated. Today, we’ve launched a bank which uses smart technology to show customers what’s actually going on with their money, so they feel in control every second of every day. All eighty-six four hundred of them,” said 86 400 chief executive Robert Bell.

86 400 is also utilising its neobank status to give customers a better interest rate. Savers will be able to earn an 2.50 per cent per annum, which is made of a base rate of 0.40 per cent and a bonus rate of 2.10 per cent.

The 2.50 rate is significantly better than the big four, with the most comparable being NAB with a rate of 2.11 per cent and is only bested by a few other accounts by the likes of AMP and Macquarie.

However, most of these maximum variable rates rely on consumers not touching their money whereas 86 400 lets customers access their money and as long as $1000 is deposited each month they get access to the bonus rate.

“We want to make sure we are designing the right things and designing those things right and we want to continue to strengthen and simplify the customers’ financial world and really strengthening that proposition,” he said.

Mr Guderjahn said the bank has deliberately been testing its products over the past year and using customer feedback.

“We really are trying to hone in on what the customer problems are, rather than just designing things and presenting it back and that has led us to include features like connected accounts, and coming up feature,” he said.

The first iteration of the accounts also includes standard banking features like Apple and Google Pay as well as instant payments from Osko.

86 400 has become the first neobank to launch its products to the general public, offering consumers both a savings and transaction account. 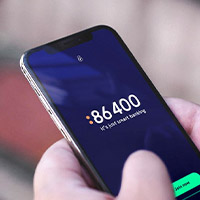