The super fund has acquired a stake in Sydney’s Quay Quarter Tower.

Industry super fund Rest has announced it has finalised its acquisition of a one-third stake in Sydney’s Quay Quarter Tower.

The 50-floor tower is a redevelopment of the previous 45-floor AMP Tower located near Circular Quay which doubled the amount of leasable space.

Rest originally entered into a contract to acquire the stake in 2018. The remaining interests are owned by the AMP Capital Wholesale Office Fund and Dexus Wholesale Property Fund.

“With the acquisition of the stake in Quay Quarter Tower, around 1.8 million Rest members now have an interest in a state-of-the-art, premium-grade skyscraper overlooking Sydney Harbour,” said Rest deputy CIO Simon Esposito.

“This landmark property is expected to generate strong long-term net returns for our members. With nearly all the office space leased under long-term arrangements, it offers a secure income stream.”

Rest said it had about $6 billion invested into unlisted property, including office buildings, retail shopping centres, industrial warehouses and residential apartments as of March this year.

The super fund’s default Core Strategy investment option has a benchmark asset allocation of 11 per cent to property.

“Investments in property assets like these can provide important stability and resilience to an investment portfolio, especially in periods where share markets are volatile and fixed income returns are weaker,” commented Mr Esposito.

“Property assets can typically generate income that tracks inflation, such as ongoing lease payments, to help offset the impact of volatility and broader inflation.”

Quay Quarter Tower has received a 5.5 Star NABERS Energy Rating as well as a 6 Star Green Star Design & As Built rating from the Green Building Council of Australia.

Construction of the building was completed in April and around 68 per cent of the original tower’s core structure was retained, including 95 per cent of its internal structural walls.

“By upcycling much of the original structure and reusing materials, more than 8,000 tonnes of embodied carbon were saved during construction. That’s the equivalent of 35,000 airline flights from Sydney to Melbourne,” said Rest head of responsible investment and sustainability Leilani Weier.

“As part of our roadmap to achieving a net zero carbon footprint for the fund by 2050, Rest is aiming to have our directly owned property assets achieve net zero carbon emissions in operation by 2030 in accordance with the WorldGBC's Net Zero Carbon Buildings Commitment.”

The super fund also recently announced an expansion to its sustainability mandate with Calvert Research and Management to include a carbon reduction tilt across its Australian equity portfolio.

The super fund has acquired a stake in Sydney’s Quay Quarter Tower. 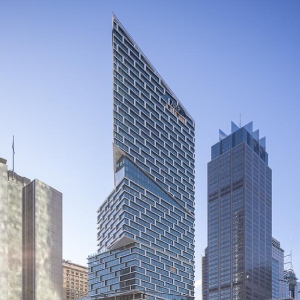