Super trustees told to brace for ‘rough seas’ ahead

APRA chair Wayne Byres has told super trustees to brace for “some rough seas” ahead.

Speaking at a Trans-Tasman Business Circle event, Wayne Byres said the performance of superannuation trustees is going to be subject to “intensive scrutiny” as more and more transparency is demanded of the sector.

“Even though the operating environment is rapidly shifting, one constant will be our focus on rectifying sub-standard practices and eradicating unacceptable product performance to drive improved member outcomes,” Mr Byres said.

Reflecting on the past five years and the increased level of scrutiny bestowed on the superannuation sector, and its regulators, Mr Byres said that APRA is “unapologetic about making use of our new powers”.

“After all, Parliament didn’t give them to us only to have them gather dust.”

He stressed that “there’s no longer anywhere for poorly performing funds to hide”.

“To state the obvious, this trend towards increased transparency is not going away,” Mr Byres said.

“Trustees need to operate on the basis they are privileged to manage other people’s money, and they need to be completely open and transparent to show that privilege is warranted.”

The period ahead, he added, will test which trustees are best equipped to manage members’ money into the future.

“Inevitably, it will be trustees with robust business practices, operating within a clearly defined strategy that puts their members’ interests first, that will be best placed to navigate their way through some tricky times. Those that are unable to do so shouldn’t expect APRA to throw them a life buoy,” Mr Byres stated.

Elaborating on why size matters in the super industry, Mr Byres explained that funds who wish to remain competitive need a “bigger boat”.

“The quickest way to achieve this is through a successor fund transfer – ideally with a large, well-performing fund,” he added, referencing APRA’s recent analysis of sustainability trends which showed that funds that pool their resources, expertise and assets realise savings they can then pass on to members.

In contrast, 17 large funds have more than $50 billion in FUM, collectively accounting for more than 70 per cent of assets.

“About half of sub-$10 billion funds face sustainability challenges with declining net cash flows and accounts. It’s hard to see how that is going to generate the best outcomes for their members,” Mr Byres said.

He, however, underlined that APRA doesn’t blindly adopt a ‘big is good, small is bad’ approach.

“Our heatmaps show there are big funds that must do better, and there should be no free pass for them. Equally, there are small funds that are doing well for their members.

“But, overall, it’s difficult to get away from the fact that size, translating into economies of scale, helps deliver better member outcomes,” Mr Byres explained.

Acknowledging the demanding environment funds currently operate in, complicated further by global developments, Mr Byres said that the “best captains will already be taking steps to make sure their crew are skilled and their ships are sound, seaworthy and primed to weather any storms that may lie ahead”.

What APRA will not do, he stressed, is allow trustees to remain afloat at any cost, especially if that cost is borne by members.

“Should it become clear that their vessel is too small or the conditions too rough, they should be prepared to move their members to another ship to ensure they reach the safe harbour of a financially secure retirement.”

Super trustees told to brace for ‘rough seas’ ahead

APRA chair Wayne Byres has told super trustees to brace for “some rough seas” ahead. 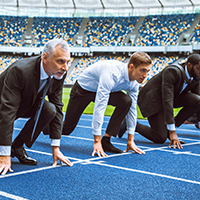