March of the mega funds continues with new merger

QSuper and Sunsuper have announced their intent to merge in a move that will create a massive, “unquestionably strong” $200 billion superannuation fund.

The agreement will give Australia’s increasingly consolidated superannuation space another mega fund, just months after AustralianSuper announced that it had reached a milestone of $200 billion in assets under management.

“The due diligence process we have undertaken demonstrates a strong business case for merging with achievable efficiencies and savings…Each of our boards believe that signing a Heads of Agreement is in their members’ best interests and we are each taking the next step to realise the potential of this merger,” QSuper chair Don Luke and Sunsuper chair Andrew Fraser.

The chief executive of the merged fund will be current Sunsuper CEO Bernard Reilly. Prior to Sunsuper he was a member of the board investment committee at NSW Treasury Corporation and brings more than 25 years’ experience with State Street Global Advisors to the role.

“He has worked in leading roles, both domestically and offshore, and brings breadth and acute strategic insight to the role.”

“The work each fund has done to this point is promising and we see the potential to achieve real benefits for members which will be further tested over coming months. A quality of both Sunsuper and QSuper is their absolute focus on the needs of members,” Mr Reilly said.

“The more we can do to build on this, the better off each of our members will be in retirement. That is our purpose.”

The current CEO of QSuper, Michael Pennisi, did not seek a role in the new organisation and will leave in 2021. All staff below the senior management level have been given commitments of employment security for at least two years, while a new 13-member board will be drawn from the existing boards of both organisations.

“The board brings together directors from a range of backgrounds, each bringing sound judgement and strong commercial acumen, as well as unique skills that ensure diversity of thought and an ongoing culture of putting members first, which will define the merged fund from day one,” Mr Luke and Mr Fraser said.

March of the mega funds continues with new merger 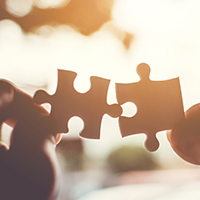