AustralianSuper has delivered a modest return against the odds and revealed that it saw almost $8 billion in funds converted to cash during the COVID-19 crisis.

AustralianSuper’s Balanced option delivered a positive return of 0.52 per cent for the 2020 financial year – a stark contrast with the 8.67 per cent return in 2019, but understandable given the cataclysmic impact that COVID-19 has had on Australia’s financial landscape.

“We have been through an extraordinary health and economic crisis that severely affected domestic and global markets,” said AustralianSuper chief investment officer and deputy chief executive Mark Delaney.

“To arrive at the end of the financial year with a positive result given the turmoil we have seen is a very good outcome for members.

“Returns were strong in the first half of the year, and financial markets have been buoyed by the enormous amount of monetary and fiscal stimulus from governments in the past three months.”

Despite the low return for 2020 financial year, Mr Delaney said the focus “should always be on the performance over the long term”.

“Consistent, long-term performance is what matters most when it comes to superannuation,” Mr Delaney said. “Even someone close to retirement is looking at being invested potentially for another 20 years.”

AustralianSuper also held more cash through the virus, due to large numbers of members asking for their investments to be switched into cash – something that Mr Delaney said was “very interesting and also very concerning”.

“If members switched to cash on March 18, which was the date that the government announced Australia would go into lockdown, and had a $100,000 balance on March 18, they would have lost roughly $8,000 by the end of June,” Mr Delaney told the ABC.

“There’s less panic and fear out there than what there was, but we haven’t fully returned to normal,” Mr Delaney said. 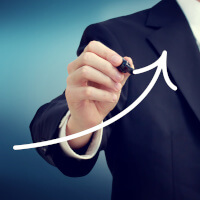