COVID will have ‘hugely negative effects’ for savers

The vice-chairman of one of the world’s largest alternative asset managers has criticised the early super release scheme, saying it isn’t wise in the long-term.

Speaking to the Australian consulate in New York, Tony James, executive vice-chairman of Blackstone, said rolling shutdowns and government policy would hit savers around the world – but some will be hit harder than others.

“I’m a great admirer of the Australian system,” Mr James said. “This voluntary shutdown of global economies will have lasting, hugely negative effects for savers, just about everywhere. Even in (Australia) now, people are able to invade, so to speak, their retirement savings for current needs.

“That makes perfect sense in the short-term, but is not as wise in the long-term.”

Mr James said that Australia had been able to act faster than the US on preventing the spread of COVID-19 due to its strong leadership and that it was well positioned for recovery.

“Australia has the best of all worlds, in a way,” Mr James said. “It has an entrepreneurial, Western, business-like culture. The people are creative, they get things done with a minimum of process and bureaucracy… at the same time, it’s on the doorstep of the East, where you’ve got all those rapidly growing Asian markets that are natural made for a lot of what Australia can do.”

Meanwhile, in the US, the real economy is “generally worse than people think”.

“Our view is it will be a very slow recovery in the US, possibly until 2023, and some sectors will benefit – maybe they’ll recovery quicker – some sectors which are right in the eye of the hurricane, so to speak, will be damaged forever,” Mr James said.  “Consumer confidence is shattered, consumption patterns down, many small businesses wiped out, all kinds of headwinds for state and local budgets…we’re going to have a long, slow recovery fundamentally.”

COVID will have ‘hugely negative effects’ for savers 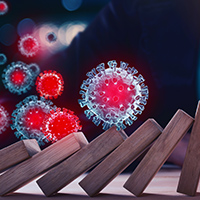