Australians now have over 41,000 superannuation investment options to choose from, which is far more than they could ever want or need, says Rice Warner.

Industry consolidation since 2007 means there are now half as many super funds in Australia, says Rice Warner – but the number of investment options has tripled to 41,000 (according to APRA statistics).

Considering that as many as 80 per cent of Australians do not exercise a choice when it comes to their super fund, 41,000 investment options appears to be far too many, says Rice Warner.

The consultant's own research found that a "staggering" 85 per cent of industry fund members do not make an investment choice and are placed in their fund's default option.

Of the remaining 15 per cent of industry fund members who do make a choice, the "clear majority" are invested in one of their fund's pre-mixed options, said Rice Warner.

Even retail funds, where choice of fund and financial advice are far more prevalent, 30 of the options on offer across all funds account for 75 per cent of all investments, said Rice Warner (see graph below). 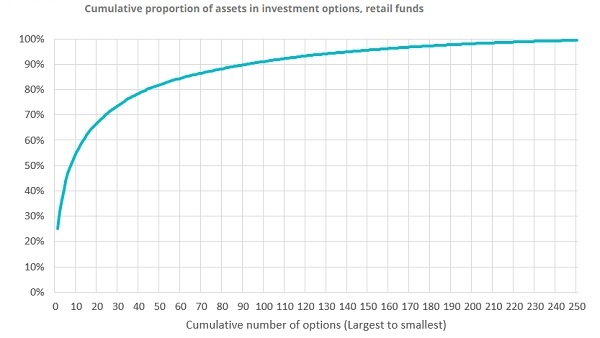 "Overall, this suggests that even in a high choice environment, members do not utilise the full suite of choices which are made available," said the consultant.

"To assist member decision making and avoid the paralysis that accompanies too much choice, perhaps funds should consider scaling back the number of options available."

In place of the 41,000 investment options currently available, Rice Warner suggested that a "revised" menu for super funds could include:

"This smaller subset would allow members to customise their asset allocations or replicate strategies without overwhelming them with too many choices," said Rice Warner.

In the context of an industry focused on member engagement and a regulator aiming to shut down inefficient funds, it is timely for funds to rethink their investment strategies and to provide solutions (investment menus) that are better tailored to member needs and behaviours.