Reserve Bank of Australia assistant governor Luci Ellis is confident Australia can sustain a far lower rate of unemployment than it has in previous years.

Addressing the University of Melbourne on Wednesday, Ms Ellis explained that in setting monetary policy, the central bank should consider how it considers what exactly it is trying to achieve.

“It has long been known that the effects of monetary policy occur with a lag. Less appreciated is that some of the crucial concepts in our analysis are in some sense invisible and therefore not directly observable. So it can be a question of how we can even know if monetary policy is achieving its goals,” she said.

The RBA assistant governor for economics pointed to data that shows the unemployment rate that Australia can feasibly sustain is lower than it has been in at least the past 40 years.

“This is great news,” Ms Ellis said. “Along with low and stable inflation, one of the bank's mandates is full employment. If it turns out that full employment is even ‘fuller’ than we thought, getting there would be a real contribution to our third mandate, the economic prosperity and welfare of the Australian people.

Ms Ellis said the level of unemployment consistent with full employment might be invisible, but it is “crucial”.

“If Australia truly can have lower unemployment – sustainably – policy should be used to try to get there,” she said.

“As the governor explained last week, that was one important consideration motivating the board's recent decision to lower the cash rate.”

Last week, the ABS announced that the unemployment rate remained steady at 5.2 per cent in May, despite 42,000 jobs being created over the same month.

The trend monthly underemployment rate rose slightly to 8.5 per cent in May, returning to the same level as May 2018.

Australia’s trend participation rate increased to 65.9 per cent in May 2019, a new high, according to the latest information released by the Australian Bureau of Statistics (ABS).

ABS chief economist Bruce Hockman said Australia’s participation in the labour force continues to rise with the participation rate up 0.4 percentage points over the past year to an all-time high of 65.9 per cent.

“The participation rate for people aged 15-64 also climbed to a record rate of 78.4 per cent, with a record 74.3 per cent of people in this age group employed,” Mr Hockman said. 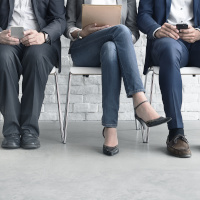