Gender equality advocate 30% Club Australia is aiming for the ASX201-300 companies to have 30 per cent of their boards occupied by women, with the hope that it will be achieved by 2021.

The company has also established a new Investment banking/Private Equity Working Group to seek greater support from the business and investment community, and to increase their contribution to the initiative.

Susan Roberts, head of Investor Working 30% Club, said the division will be working with investors from the wealth management sector and Australian super funds to focus on achieving diversity on ASX300 boards.

“Large super funds and fund managers are leading the way in advocating for gender diversity, based on the belief that companies that are well-governed and sustainable will deliver positive results over the long term” Ms Roberts said.

Previously, only firms in the top 200 listings on the ASX had been targeted.

The number of female company directors for the ASX201-300 last year stood at 19.7 per cent, with 28 companies still lacking women on their boards.

“I believe the time is right to look beyond ASX 200 companies to also include the small cap companies sector.”

Ms Wakefield Evans said it been proven that gender diversity can be reached without quotas and intervention as long as there are passionate advocates for change across ASX chairs and directors.

“This is an amazing achievement as Australia is the first country in the OECD region to achieve significant targets without regulatory intervention, ahead of UK, US and Canada,” she said.

There are also 50 boards in the top ASX200 with only one woman on their board. 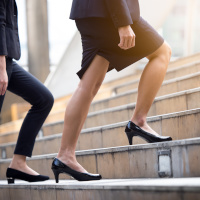