The Commonwealth Director of Public Prosecutions (CDPP) has confirmed that it has issued court attendance notices calling on ANZ, Citi and Deutsche Bank and several senior executives to face charges for alleged cartel conduct.

Speaking to InvestorDaily sister title The Adviser, a spokesperson for the CDPP confirmed that ANZ, Citi and Deutsche would be asked to appear before Sydney's Downing Centre Local Court on 3 July.

The CDPP expressed its intentions to commence proceedings against the financial institutions, as well as a number of other individuals, on Friday 1 June for alleged cartel conduct.

A statement released by ACCC on late Tuesday revealed the names of these individuals to be "several senior executives".

Deutsche Bank issued a statement in response to the charges, repeating that it would "vigorously defend charges brought by the CDPP and the ACCC".

"Deutsche Bank reiterates that it believes it and its staff, including two former staff members Michael Ormaechea and Michael Richardson, acted responsibly, in the interests of clients and in a manner consistent with the Corporations Act and ASIC market integrity rules in relation to ANZ’s institutional share placement in August 2015.

"Both Michael Ormaechea and Michael Richardson are highly regarded and have our full support," the statement said.

ACCC chairman Rod Sims said the "serious charges" had followed an ACCC investigation that had been running for over two years.

“Charges have now been laid by the Commonwealth Director of Public Prosecutions and the matter will be determined by the Court,” he said.

ANZ, Citi and Deutsche Bank have all denied the charges and said they would “vigorously defend” themselves and their employees.

Treasurer Scott Morrison said on Friday that the allegations were “very serious matters”. 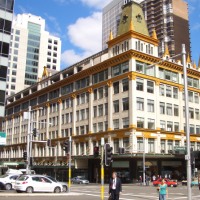