‘Go where the emissions go’: The challenge for Australia to achieve net zero

The former Bank of England governor has laid down the challenge for Australia to achieve net-zero emissions by 2050.

Speaking at the Australian Council of Superannuation Investors conference on Wednesday, Mark Carney said all countries including Australia must “go where the emissions go”.

“If we’re going to de-carbonise, let’s look at the industries that do need to do that,” he said.

“It’s classic investing – you’re identifying good management teams with plans that they can execute and providing them with capital.

“I think that discipline of going there and assisting with the transition is going to make the difference in terms of what the world’s trying to do, which is to get to net zero.”

“The key findings included that existing technologies and solutions can address almost all the emissions in the supply chains and Australia must capitalise on these emerging technologies and energy exports including green hydrogen and steel and rapid deployment of the technologies,” Ms Skarbek said,

“Technology will require significant investment and leadership and transformation of the energy system.”

Ms Skarbek continued, “For heavy industry in Australia to remain globally competitive, these transitions are technically feasible, but we know that they’re complex.

“They will require significant investment and leadership… and coordination and alignment and transformation of the energy system. All of those need to move forward at the same pace to enable the other.”

The conference took place ahead of the he United Nations Climate Conference of the Parties (COP26) this November.

‘Go where the emissions go’: The challenge for Australia to achieve net zero

The former Bank of England governor has laid down the challenge for Australia to achieve net-zero emissions by 2050. 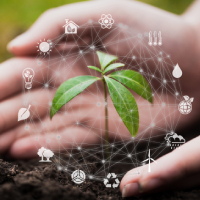