Small and mid-cap stocks are often underresearched segments of the market but represent an area in which Investors Mutual Limited often finds some very underappreciated, quality stocks which offer very good value.

Because this market segment, which broadly covers ASX 100 to ASX 300 stocks, is often underresearched, it brings IML’s disciplined, research-led stock-selection process to the fore.

IML seeks out companies which we believe have a strong, sustainable competitive advantage and which are run by capable management that generate a recurring earnings stream which can grow over time.  When a company meets these criteria, we seek to buy and own shares in the company only if they are trading at a reasonable price.

With the Australian sharemarket now at record highs and many stocks and sectors looking a bit stretched, here are three examples of stocks we are happy to own in the small and mid-cap sector which we believe can do very well over the next three to five years.

Event Hospitality & Entertainment (EVT) is one of Australia’s largest hotel and cinema operators.

The company also operates the Thredbo alpine ski resort. While the company has a strong portfolio of operating assets which are run extremely well by a very capable management team, we believe most investors underestimate the company’s vast property holdings. The cinema business has had a strong start to financial year 2020 after two mixed years, driven by a strong slate of releases, and, at the time of the AGM in October, Australian box office revenues were up 12 per cent on the previous year.

EVT’s scale allows it to drive higher returns and margins through buying power and the ability to invest in technology and loyalty programs. The theatres are in the midst of a major refresh programme which should support share gains in the coming years. Despite the growing popularity of Netflix and other streaming services, global box office attendances have remained robust over the past decade – albeit increasingly slanted towards superhero movies and sequels.

As for the hotel side of Event’s business, room rates for Australian hotels are currently under pressure as a result of increased supply and a slowdown in inbound tourism. However, Event’s hotels division continues to hold up well, thanks mainly to the success of its homegrown QT brand. Hotel earnings were flat in FY19 while all major operating metrics showed like-for-like growth, an excellent result given the challenging environment.

The company continues to expand the QT footprint in Australia through management agreements in cities where it does not have appropriate pre-existing sites, while the lower budget Atura brand has also performed well since launch. The success of the QT and Atura brands supports our positive view of the company’s management and ability to leverage the group’s property footprint to grow organically over time.

While the operating assets are performing adequately, the major attraction of EVT is its $2 billion property portfolio, which not only underpins the stock’s valuation but also creates significant opportunities for future value creation. For example, the company has recently lodged development applications for major redevelopments of its flagship Sydney properties at 458-472 and 525 George Street in Sydney. These mixed-use developments will incorporate hotels, cinema, retail and commercial office space.

Adjusted for the property at fair value, we estimate that Event’s operating assets are currently valued at only 3 times earnings before interest, tax, depreciation and amortisation (EBITDA) at its current share price. This compares to global cinema and hotel chains on 8 times and 14 times EBITDA respectively.

As a result, we continue to view Event as undervalued despite a headline price-earnings multiple of about 20 times. We also note that the Australian REIT sector is also currently trading at a significant premium to net asset value, whereas Event effectively trades at a significant discount if the value of the operating assets is taken into account.

Event’s strong asset backing and conservative balance sheet also support a high payout ratio, with a dividend yield of just under 4 per cent. Event remains a core holding for us in the small and mid-cap space.

GWA is a long-established company – the company owns the Caroma and Dorf brands, amongst others.

In the last decade, the company has been transformed from being an Australian manufacturer of bathroom products to becoming a leading designer, importer and distributor of bathroom, kitchen and laundry fixtures. GWA has achieved this shift by sourcing products through a range of exclusive agreements with offshore manufacturers.

In determining whether to own shares in a company, one of the key things IML looks for is capable management. In this regard, we rate GWA’s CEO, Tim Salt, extremely highly. Before joining GWA, Mr Salt spent many successful years in running sales and marketing division of a major premium beverage brand before joining GWA. He and his team at GWA have done a fantastic job of reinvigorating the GWA brand and focusing on new product development and on sales and marketing and product support.

A large part of GWA’s repositioning has been through new product development. For example, the company launched a new rimless toilet a couple of years ago called “Caroma Cleanflush”, which aimed to make the bowl easier to keep clean and, therefore, more hygienic. This new product has helped GWA gain retail floor space with Reece, one of Australia’s largest toilet and vanity sellers in the country.

The next wave of GWA’s innovation is focused on reduced water usage in commercial bathrooms. The new innovation, called “Smart Command”, uses the latest technology to connect all water usage products in a commercial building with Bluetooth devices. A central hub then monitors water consumption in real time. In essence, if there is a toilet or tap leaking in the building (think of a 30-storey office block), this can be spotted remotely and turned off remotely as an alert is sent to advise the building manager of the issue. Building owners are very interested in this as it reduces water consumption and helps increase the building’s NABERS (energy efficiency and environmental impact) rating, which should translate into the owner being able to charge a higher rent.

Another recent development is the acquisition of a New Zealand company called Methven, which has a strong market position in taps but had struggled with its scale. GWA has an existing tap range with Dorf and Clark to which it can now add the well-regarded Methven range. This will allow GWA to leverage its existing sales and marketing teams with a broader product range which should enable good efficiencies to be realised over time. It also gives GWA a beachhead into certain overseas markets, such as the UK, where Methven has operated for some time.

Now that GWA has moved to a full importation model, the company has essentially become fairly “capital light” and as such does not require as much capital to grow which will help with more consistent cash flow generation from the business over the long term.

GWA has a very strong balance sheet and its stock yields more than 5 per cent fully franked.

GWA remains an attractive stock to own in our view. The company is often lumped in with other building materials companies. However, GWA is largely exposed to the repair and renovation market which makes the company’s earnings less cyclical than other building materials companies, which have greater exposure to the residential construction market.

Southern Cross Media (SXL) is Australia’s largest radio network and one of the largest traditional media proprietors in regional Australia.

Southern Cross has a share of around 35 per cent of the Australian metro radio industry and a share in regional Australia of well over 50 per cent.

SXL’s earnings are weighted 85 per cent to radio which is a medium with fairly stable listenership that has proven resilient in the face of disruption compared to other forms of media. Following four years of steady growth, the sector is currently being impacted by a cyclical advertising downturn.

Part of Southern Cross’ longer term upside will come from unlocking the disconnect between the share of Australia’s population outside of the five largest cities (36 per cent) and the corresponding share of spend (about 10 per cent).

We particularly note that the definition of “regional” actually includes many large and fast-growing population centres such as Canberra, Hobart and the Gold Coast. SXL has also invested ahead of the curve in digital audio, with the largest share of Digital Audio Broadcasting spectrum and a growing podcast business.

While regional TV advertising has been under pressure for several years, Southern Cross’ downside is limited by the variable cost nature of its business. The majority of the cost base is a revenue-linked affiliate fee to partner Nine Network. Nonetheless, if media ownership laws are relaxed, we view a disposal of this business as likely, which we believe would be a positive given the dynamics and long-term trends of free-to-air TV.

In addition to being a solid business with an undemanding valuation, we believe Southern Cross is also a likely acquisition candidate for either a trade buyer or private equity. For a trade buyer, this would be an attempt to gain scale in Australia in order to keep pace with Nine Entertainment and News Corp. For a financial buyer like a private equity fund, the high cash generation and low capital expenditure requirements (in addition to Southern Cross’ low multiple) could prove very attractive. We note that local private equity players have had huge success with outdoor media buyouts in the past and both Seven and Nine have been through private equity ownership.

Southern Cross shares are cheap on a PE of 11-12 times FY20 earnings, with the valuation further supported by an attractive 6 per cent dividend yield if one assumes a dividend in line with the bottom of the company’s target dividend payout ratio of 65-85 per cent.

With the Australian sharemarket trading at record highs and with many sectors looking fairly fully priced, we continue to find very good long-term value in many good-quality small and mid-cap stocks. We continue to feel comfortable with the long-term prospects and valuations of these companies despite their often-lacklustre performances in the short term vs many stocks with seemingly more exciting prospects.

While the information contained in this article has been prepared with all reasonable care, Investors Mutual Limited (AFSL 229988) accepts no responsibility or liability for any errors, omissions or misstatements however caused. This information is not personal advice. This advice is general in nature and has been prepared without taking account of your objectives, financial situation or needs. The fact that shares in a particular company may have been mentioned should not be interpreted as a recommendation to buy, sell or hold that stock.

Small and mid-cap stocks are often underresearched segments of the market but represent an area in which Investors Mutual Limited often finds some very underappreciated, quality stocks which offer very good value. 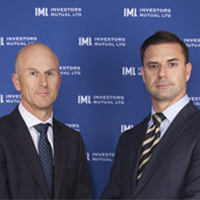