Three of the big four Australian banks have signed on to align their businesses with the UN Sustainable Development Goals (SDGs) and the Paris Agreement, as part of a greater global initiative.

ANZ, Westpac and NAB were among the signatories committing to the Principles for Responsible Banking (PRB) of the United Nations Environment Programme Finance Initiative (UNEP FI).

Around one-third of the global banking sector, 130 banks, holding a collective $69.4 trillion in assets, have joined the pledge, which launched one day ahead of the UN Climate Action Summit.

The six principles, which centre around alignment, impact, clients and customers, stakeholders, governance and target setting, and transparency and accountability, were formed by 30 founding banks through the UNEP FI. Westpac and NAB were included in the founding banks.

Christiana Figueres, executive secretary of the UN Framework Convention on Climate Change said the transition to low-carbon and climate-resilient economies that support the goals of the Paris Agreement requires an additional investment of at least $88.5 trillion (US$60 trillion) from now until 2050.

“As the banking sector provides over 90 per cent of the financing in developing countries and over two-thirds worldwide, the principles are a crucial step toward meeting the world’s sustainable development financing requirements,” Ms Figueres said.

“As an industry, it’s of increasing importance to all go in the same direction and speed up efforts to support the UN SDGs,” Mr Ermotti said.

Westpac chief executive Brian Hartzer commented: “Signing up to the principles is another way of demonstrating that we are serious about our role in shaping and financing a sustainable future and making a positive contribution to society.”

“It’s an opportunity for all of us in the banking sector to work together on the things that matter most and the things we can influence through our financing decisions.”

Meanwhile Philip Chronican, chief executive and chairman-elect, NAB noted: “Customers need banks to be clearer and more transparent about how products and services create value for them, as well as the communities where they live and work.

“The UN principles are consistent with NAB’s determination to serve our customers better and create a culture that builds, maintains and preserves trust.”

Shayne Elliott, chief executive of ANZ said: “The principles align with our purpose. Through our customer relationships and the products and services we offer, we want to make our contribution to solving society’s social and environmental challenges.”

Unlike its big four rivals, CBA has not signed on to the initiative.

It has however taken on some climate action, having pledged to cut off its exposure to thermal coal by 2030.

Three of the big four Australian banks have signed on to align their businesses with the UN Sustainable Development Goals (SDGs) and the Paris Agreement, as part of a greater global initiative. 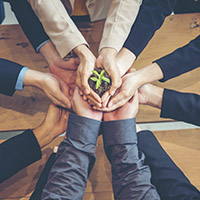