IOOF’s new chief executive has charged the big banks with the “crisis of confidence” in financial advice that the industry is dealing with today.

Speaking to analysts following the release of its full-year results on Monday, IOOF CEO Renato Mota said the IOOF business is fundamentally based on the value of advice to communities and to society as a whole.

“Four years ago, we put a stake in the ground to be an advice-led business. We did so in a world that was very much dominated by product-led competitors,” he said.

“That rationale of being advice-led was centred fundamentally in the proven belief, empirically, that financial advice helps create a healthier society by any measure.

“What has changed in the last year or two is the supply of advice,” the CEO said, noting changes to education standards, governance of advice, succession planning and the retreat of some of the larger institutions from the sector where previously they have viewed advice as “simply a channel to sell their products, or a sales channel to market.”

“I believe history will suggest that our larger banking institutions have created the false industry we are dealing with today and created the crisis of confidence in advice,” Mr Mota said.

“This is something we are committed to restoring to ensure a professional and sustainable advice industry for all Australians.”

IOOF is confident that salaried advisers can achieve an EBIT margin of up to 50 per cent.

“If you look at listed groups or large institutions, or specifically if you’re looking at bank salaried models, I don’t think that is the right benchmark,” Mr Mota said.

“Our work with advisers through our Advice Academy has absolutely proven that a 50 per cent EBIT margin is realistic. I don’t think you would see that in some of our listed counterparts, but we believe it is achievable.”

IOOF’s new chief executive has charged the big banks with the “crisis of confidence” in financial advice that the industry is dealing with today. 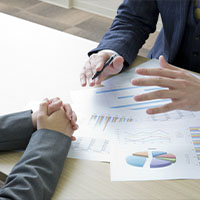