Macquarie Group will be disbanding its Capital and Asset Finance (CAF) unit, dividing it between its other businesses.

Certain fiduciary businesses such as the infrastructure debt business (MIDIS) have been moved from CAF Asset Finance in the banking group to MAM in the non-banking side.

The company also confirmed results for financial year 2020 will be “slightly down on FY19”, despite the its performance holding somewhat steady for the first quarter of the financial year.

In the market-facing businesses, equities are expected to remain “challenging” while strong market conditions for the commodities and global markets business are not expected to continue through the remainder of FY20. Investment related income for Macquarie Capital is also forecast to fall.

The group had first told shareholders to expect a weaker year when it presented its FY19 results in May.

Chief executive Shemara Wikramanayake said the group’s results for the first quarter of FY20 ending 30 June performed in line with the prior corresponding period, but was slightly down on the prior quarter.

“Macquarie’s annuity-style businesses were down on the prior corresponding period,” Ms Wikramanayake said.

“Compared with the prior corresponding period, Macquarie Asset Management (MAM) was down mainly due to the timing of performance fees and higher operating expenses following recent platform acquisitions; Corporate and Asset Finance (CAF) was down due to reduced loan volumes and realisations in CAF Principal Finance.”

In CAF, the group’s asset finance and principal finance portfolio came to $21.5 billion in June, broadly in line with the prior quarter.

Meanwhile Macquarie Capital saw its fee revenue increase on the pcp due to higher fee revenue from M&A and debt capital markets (DCM).

“Macquarie’s markets-facing businesses were up on the prior corresponding period primarily due to the strong performance of the commodities platform in commodities and global markets (CGM), partially offset by lower investment-related income in Macquarie Capital (MacCap),” Ms Wikramanayake said.

The bank also added that its financial position exceeds APRA’s capital requirements, with group capital surplus of $5 billion at 30 June. This was down from $6.1 billion in the prior quarter, following payment of the final dividend for FY19.

APRA just this week put the bank on notice that its reporting of its intra-group funding as stable had been in breach of its prudential liquidity standard.

Chairman Peter Warne noted in his address at the company’s annual general meeting that the bank has continued to apply changes to its approach to risk culture and conduct following the royal commission.

Macquarie has rolled out a number of initiatives such as a targeted training program to over 250 operational risk, compliance and chief operating officer specialists, with further training on the way.

The company has also tackled a number of ESG-related goals, including achieving 50/50 male and female representation in its intern and graduate programs.

Despite this, Macquarie has still has a gender imbalance in its board: 36.4 per cent, or four of its 11 directors are female. Mr Warne has previously publicly discounted gender quotas.

In the past year, former RBA board member Jillian Broadbent (as well as former Westpac group executive Philip Coffey) was appointed to the Macquarie board, boosting the female count. Ms Wikramanayake, appointed in her role last year, was the bank’s first female boss.

Its environmental and social risk (ESR) policy is its attempt at embedding environmental and social risk management in investment decision making. Through the policy, the group said it has established a due diligence approach to identify and manage human rights risks in investment decision making and in screening new client and supplier relationships.

Despite the dampened outlook for the coming year, Macquarie has maintained a positive medium-term forecast.

Macquarie Group will be disbanding its Capital and Asset Finance (CAF) unit, dividing it between its other businesses. 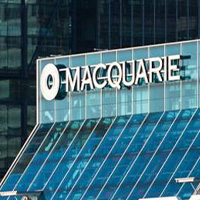