New research conducted shortly after the royal commission was announced has found that financial services workers were more stressed and less engaged than average.

SuperFriends’ ‘Indicators of a Thriving Workplace’ survey found that over a quarter of people in the financial services industry experienced very high levels of stress in their job.

The research found that workers in the industry were less engaged with only 13 per cent feeling highly engaged compared to the national average of 19 per cent.

Almost a third of financial services workers reported experiencing job insecurity, rising to four in ten for those in the insurance sector.

The research was carried out shortly after the royal commission was announced. SuperFriend chief executive Margo Lydon said this would have impacted the results.

“Our research was carried out at a time of unprecedented change and uncertainty for the industry.

“Many employers in the sector have felt the effect of this scrutiny on a very personal level, and this could have potentially had an impact on their mental health,” she said.

“With the prospect of greater regulation and compliance pressures in the industry making roles more complex, a key focus for employers should be creating job designs that enable employees to bring their best self to work,” she said.

According to the survey, 34 per cent of employees believed that lack of time was the biggest barrier to employers improving mental health in the workplace. Ms Lydon said businesses needed to do more about it.

“Businesses should ensure individual frontline managers are given the time and the training to help prevent workplace mental health issues occurring in the first place,” she said.

Following the royal commission, the industry needed to have a clear focus on mental health practices to let employees thrive, said Ms Lydon.

“Leaders who understand the need to evolve and update their mental health and wellbeing practices post the royal commission will lead the way for innovative workplaces where employees can thrive,” she said.

New research conducted shortly after the royal commission was announced has found that financial services workers were more stressed and less engaged than average. 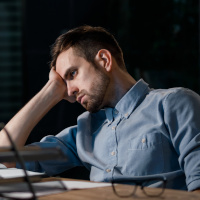