Property research group CoreLogic’s latest Hedonic Home Value Index has revealed that national home values fell by 0.7 per cent in February, driven by a 0.9 per cent decline across Australia’s combined capital cities and a 0.3 per cent drop across combined regional locations.

Adelaide’s residential property prices remained flat, while Hobart was the only capital city to report an increase in value of its dwellings, which rose by 0.8 per cent.

Reflecting on the results, CoreLogic’s head of research, Tim Lawless, said that while the national rate of decline eased in February, tighter credit conditions are continuing to stifle demand for housing.

“The national rate of decline eased relative to January and December, when dwelling values were down by around 1 per cent. However, the February results remain overall weak, with the geographic scope of negative conditions broadening,” he said.

“The fact that we are seeing weakening housing market conditions across regions where home values were previously rising at a sustainable pace and economic conditions are relatively healthy is a sign that tighter credit conditions are having a broad dampening effect on buyer activity.”

On an annual basis, CoreLogic has reported that national dwelling values fell by 6.3 per cent in the 12 months to February 2019, largely spurred by a 7.6 per cent decline across Australia’s capital cities, particularly in Sydney and Melbourne where home prices declined by 10.4 per cent and 9.1 per cent, respectively.

Mr Lawless attributed the varying trend to an uptick in demand for affordable hosing from first home buyers (FHBs) and a reduction in demand for high-debt borrowing from lenders.

“The stronger conditions across the more affordable properties can be explained by the surge in first home buyer activity in these cities, as these buyers take advantage of stamp duty concessions available in NSW and Victoria,” Mr Lawless added.

“Another factor could be that lenders are likely reducing their exposure to borrowers with high debt levels relative to their incomes, which could be skewing demand towards the middle to lower end of the housing market in the most expensive cities.”

However, according to the analyst, the entrenchment of tighter credit conditions off the back of the banking royal commission would continue weighing on the national housing market.

“Stricter lending standards are a logical outcome following the royal commission, and we are likely in the early phases of a ‘new normal’ for mortgage lending where borrowers will face closer scrutiny around their expenses and ability to service a loan, and conversion rates on loan applications are likely to remain lower than they have been over prior years,” he said.

Mr Lawless added that low mortgage rates could help offset the headwinds, particularly if the Reserve Bank of Australia moves to cut the official cash rate in response to a potential slowdown in consumer spending.

“If households reduce their spending as the wealth effect continues to reverse, then interest rate cuts or other policy intervention could become more likely,” he concluded. 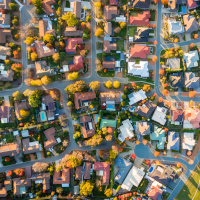