Emerging markets may be volatile, but investors are able to take advantage of the volatility to make strong returns.

New analysis by research house Lonsec has revealed that while emerging markets are volatile they also produce significant real returns over the long term.

The research found that the emerging market had higher returns over the past twenty years despite the increased volatility. 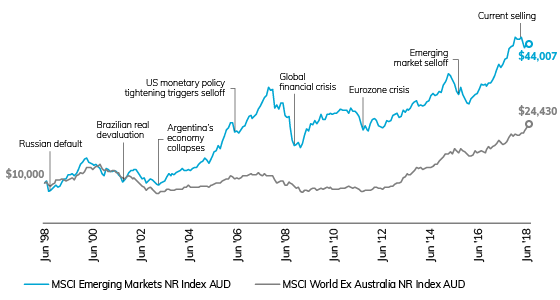 Lonsec said emerging markets captures a large variety of countries, including places like Turkey that have suffered from uncertainty while other economies like India continue to rapidly grow.

GDP growth does not necessarily translate to strong investment returns but in the case of India, for example, the market performance was correlated with GDP growth.

Because of these aspects, the broader emerging market index often has countries that are outperforming and therefore balancing those that lag.

This has resulted in an increased volatility but also increased returns if investors can stick out the ride.

Emerging markets may be volatile, but investors are able to take advantage of the volatility to make strong returns.