A report issued by Moody’s Investors Service has declared that Australia has maintained the top credit rating it has held since October 2002.

“The stable outlook on Australia’s rating reflects Moody’s expectation that, even in the event of shocks, possibly in the housing market and/or to the economy’s access to external financing, the resilience of the economy supported by countercyclical macroeconomic policy would allow Australia’s credit metrics to remain consistent with an AAA rating,” the report said.

The positive credit rating was attributed to a number of factors, such as: 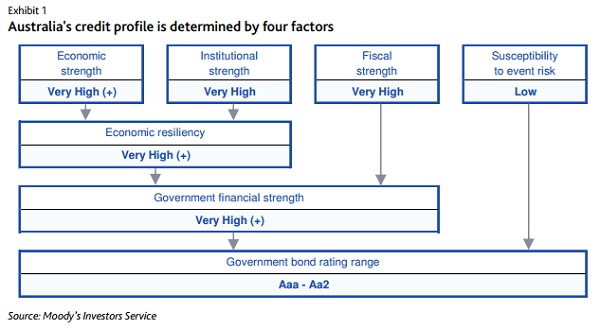 However, the report also noted a number of factors that could lead to a rating downgrade, such as evidence of a drop in the economy’s resilience to negative shocks.

“Indications that the hurdles to fiscal consolidation will be higher than we currently expect and last for longer, leading to a faster and more prolonged deterioration in fiscal metrics, would denote weaker institutional strength and would be likely to put downward pressure on the rating,” the report said.

A statement released by the office of Treasurer Scott Morrison said: “The government's record of strong economic management has ensured Australia's AAA credit rating has been maintained with all three major ratings agencies, one of just ten countries to have achieved this.”