Crude oil prices have risen by almost 70 per cent in the past 11 months, eating into consumer spending – but a recession prompted by an oil ‘shock’ is still some way off, says Aberdeen Standard Investments.

In its global overview briefing released last week, Aberdeen Standard Investments said the rising oil price is panning out to be more of a 'blip' than a 'shock'.

Ominously, rapid spikes in the proportion of personal disposable income devoted to spending on petrol and other energy goods have played a causal role in "four of the past six US recessions", said Aberdeen Standard Investments.

However, the positive effects of higher oil prices on energy investment should provide some offset to the fall in consumption, said the note.

On the positive side, Aberdeen Standard Investments noted the current spike in oil prices is 'not at danger levels yet', referring to the graph below. 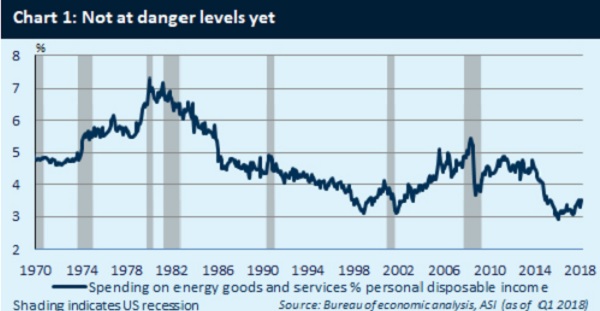 But the note said there is no room for complacency.

"History is littered with examples of oil shocks that were not expected by the commodity forecasting community," it said.