Don't get blindsided by volatility: SuperRatings

Despite the market dip in February this year, the median balanced super option is still up 9 per cent per annum since the low point of the GFC nine years ago, says SuperRatings.

Super research house SuperRatings has laid out the impressive growth of the typical investment option since the depths of the global financial crisis in 2009.

The median balanced option has delivered an average return of 9 per cent per annum in the past nine years, representing accumulated growth of 117 per cent, said SuperRatings.

The median growth option (with growth assets of 77-90 per cent) delivered even more impressive returns – 9.9 per cent per annum or an accumulated 134 per cent.

The impressive returns take into account February 2018, which saw the first negative return for the median balanced option (-0.3 per cent) since January 2017. 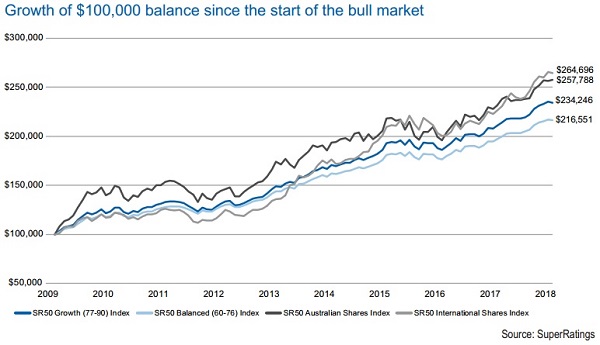 SuperRatings chief executive Kirby Rappell emphasised the importance of 'staying the course' and not switching out of growth assets during times of heightened volatility like the GFC.

"If the volatility of the GFC resulted in a member switching from a relatively riskier growth option to a balanced option during the depths of the crisis in 2009, they would be approximately $17,700 worse oﬀ today (assuming a starting balance of $100,000)," said SuperRatings.

"After nine years, you might say the global share market rally is getting a bit long in the tooth, but this is at odds with the economic data, which is pointing to a strengthening economy,” said Mr Rappell.

“Market corrections, while they can cause members to panic, are often a necessary check against bubbles. What the recent volatility tells us is that the market is capable of self-reﬂection, and that investors are focused on valuations as well as the broader economic picture," he said.

Don't get blindsided by volatility: SuperRatings

Despite the market dip in February this year, the median balanced super option is still up 9 per cent per annum since the low point of the GFC nine years ago, says SuperRatings.