Australian-made global equity funds on the up

Australian-based global equity funds have enjoyed a resurgence over the past five years, says Zenith – both in total number and overall funds under management.

A new report by research house Zenith Investment Partners has revealed the extent to which Australian financial advice firms are shifting towards home-grown international share funds.

Since 2012, the number of Australian-based global fund managers on Zenith's approved product list has increased 400 per cent from four to 20 (see chart, below).

At the same time, the number of offshore international share managers increased 105 per cent from 21 to 43, according to Zenith.

There has also been a significant shift in the weight of money invested in Australian-based global equity managers, with total funds under management (FUM) increasing from $6.4 billion in 2012 to $42.6 billion as at 30 September 2017.

As a proportion of total FUM invested in global equity funds, Australian-based funds have doubled from 16 per cent to 32 per cent, said the report. 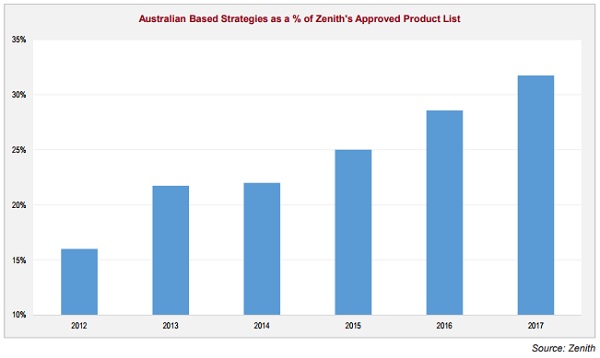 When it comes to the driving factors behind the increased take-up of 'home grown' international share funds, Zenith pointed to three factors.

First, Australian investment teams have been able to leverage technology to a great extent, the report said, which allows them to compete with larger offshore managers.

"For example, it is no longer necessary for teams to travel to listen to conference calls with company management. Additionally, through improved screening and filtering tools these teams are able to focus their research on only the most attractive investment ideas," the report said.

Second, regulators around the world have increased their reporting requirements of companies in recent years, which has resulted in enhanced transparency of offshore events for Australian investors, said Zenith.

Finally, the fact that Australia is now the world's sixth largest asset pool of FUM (standing at US$1.6 trillion) means that local fund managers have benefited through improved access to management, the report said.

Over the past five years, Zenith's Australian-based international equity managers have delivered returns of 17.7 per cent (compared to 17.5 per cent for offshore managers), which is identical to the benchmark as represented by MSCI World ex Australia.

"We note that the Australian-based managers have achieved this outcome with volatility levels lower than that of both the offshore managers and the benchmark," the report said.

Australian-made global equity funds on the up

Australian-based global equity funds have enjoyed a resurgence over the past five years, says Zenith – both in total number and overall funds under management.