Investors needn’t be worried about the prospect of mass unemployment caused by artificial intelligence and machine learning, says AMP Capital.

According to the latest Econosights note by AMP Capital senior economist Diana Mousina, new technologies had not ever created “mass rise in unemployment” and the notion that automation would take over jobs had been “grossly overestimated”.

“There is no need to fear technology,” Ms Mousina said.

“Technology is a long-run factor that has been helping to keep a lid on inflation.

“Investors should not be worried about mass unemployment across the advanced economies caused by technological disruptions,” she said.

Statistics in a “widely referenced report by Frey and Osborne in 2013” had floated the idea that nearly half of jobs in America were at risk of ‘computerisation’ but in reality, only about nine per cent of jobs across the OECD were susceptible to automation, she said.

However, it was creating a phenomenon of “distortion in the labour market” called ‘job polarisation’.

“Job polarisation refers to a decline in middle-skill jobs while the share of low-skill and high-skill jobs increases,” Ms Mousina explained.

Two driving factors behind job polarisation were the impact of technology (that is, machines carrying out tasks previously done by humans) and the movement of jobs overseas.

“Middle-skill jobs tend to be more susceptible to displacement by technology because jobs in that group tend to be routine-based manual or cognitive tasks (e.g routine manual jobs include construction, transportation and production jobs and routine cognitive jobs include sales and office occupations), which means they can be learned and replicated by machines,” she said.

“High-skill jobs tend to be harder to replace by machines because they are non-routine and cognitive based (e.g. management and professional jobs), which requires human judgement and expertise.

“At the other end of the spectrum, low-skill jobs are usually non-routine manual tasks (e.g. service-based jobs that are related to assisting others like in cleaning and gardening), which are also difficult to replace by a machine.” 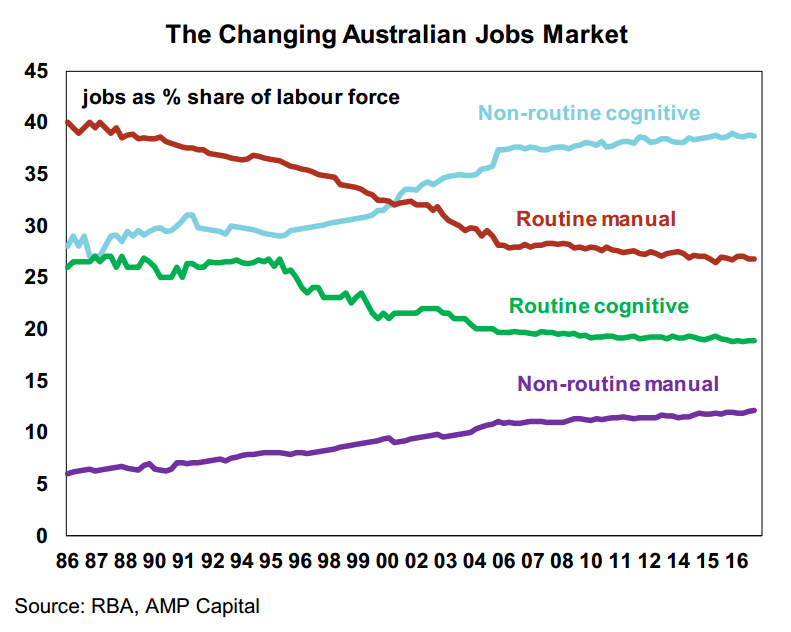 The advance of technology would not replace humans, but rather see roles evolve as well as “allow productivity gains and cost benefits for firms that will allow a change in tasks for occupations”.

“Technology can make humans more creative, improve productivity for the economy (that has been lagging over recent years) as well as improve living standards (e.g. usage of new technologies in medicine) across the global economy, particularly in developing countries.

“But, middle-skill jobs and incomes will continue to be at risk by technology which is likely to create continued angst in these population groups,” she concluded.

Investors needn’t be worried about the prospect of mass unemployment caused by artificial intelligence and machine learning, says AMP Capital.