Half of ASX200 CEOs have finance background

The chief executives of ASX200 companies share certain characteristics and attributes with one another, including a background in financial services, research has revealed.

Research conducted by specialist recruiter Robert Half has revealed that half (50 per cent) of ASX200 CEOs have a background in finance, financial services or accounting.

According to Robert Half senior managing director for Asia-Pacific David Jones, this statistic was “not surprising”.

“Business leaders with strong financial capabilities are highly valued as they can easily interpret the financial ramifications of business decisions, adding a practical, financial perspective to a strategic one.”

Nearly half (47 per cent) of all ASX200 leaders were based in the metropolitan Sydney area, and 59 per cent of chief executives had had international working experience, which Mr Jones said was a distinguishing factor.

“In today’s globalised world, obtaining experience of different working cultures is an important way for business leaders to differentiate themselves,” he said.

“As technology continues to develop and make it easier for more businesses to work across international boundaries, being able to demonstrate success in different countries and global assignments is a credential in business leaders that is highly sought-after.”

Most of the company leaders were also well-educated, with 82 per cent holding an undergraduate degree (the most popular degrees being a bachelor of commerce, science, economics, engineering or business), and 54 per cent having completed a postgraduate degree.

The research also found that 94 per cent of ASX200 chief executives were men; 7 per cent had the name Andrew.

Loyalty also appeared to be rewarded, with 62 per cent of chief executives having been promoted internally after an average of eight years with the company.

“With the advancement of automation, digital transformations, regulatory frameworks, and globalisation, companies need leaders who can not only meet business goals, but also successfully leverage these changes, whilst possessing a strong people focus as well as financial and business acumen in order to keep their organisation afloat and prosperous during continuously fluctuating economic conditions,” he said.

Half of ASX200 CEOs have finance background

The chief executives of ASX200 companies share certain characteristics and attributes with one another, including a background in financial services, research has revealed. 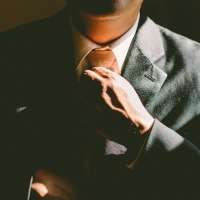