Global flows into fixed income exchange-traded products is on track to double in 2016, according to new data released by BlackRock.

The latest BlackRock Global ETP Landscape report reveals fixed income flows accelerated to US$13.9 billion in July, taking them to US$80.6 billion for the year to 31 July.

In comparison, cumulative fixed income flows were US$91.7 billion for the entire 2016 calendar year.

“Investment grade and high yield corporate bond funds brought in US$4.9 billion and US$2.2 billion respectively, and broad US debt funds added US$2.4 billion while Treasury funds shed (US$0.6 billion), chiefly from short duration,” BlackRock said.

Overall, global ETP flows for July were US$55.2 billion, which was the strongest month since December 2014.

The driving factor, according to BlackRock, was investors seeking out yield as well as asset classes less affected by the fallout of Brexit.

“Flows grew quickly in the first two weeks of the month, favouring US and emerging markets equities as well as EM and corporate debt,” the report said.

As at 31 July 2016, there was approximately US$3.31 trillion invested in exchange-traded products.

Conditions right for commodities to rally

Global flows into fixed income exchange-traded products is on track to double in 2016, according to new data released by BlackRock. 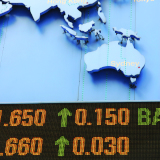