Two new group executives have been named at the multinational giant, including a chief digital and information officer. UBS head of group technology, Mike Dargan, will join the company’s group executive board with his promotion to chief digital and information officer.

Mr Dargan will commence in the role from May, where he will replace the Sabine Keller-Busse, in the former group chief operating officer function.

The newly formed digital chief position will comprise the current group technology teams, as well as group corporate services. UBS will move its business-aligned operations into their respective business functions, with shared operations to remain under the eye of Mr Dargan.

He has held the role of head of group technology since he joined the company in 2016.

Previously, Mr Dargan was chief information officer for corporate and institutional banking at Standard Chartered Bank and managing director and head of corporate strategy and M&A for the EMEA region at Merrill Lynch.

Meanwhile, UBS group general counsel Markus Diethelm will be stepping down from his role in November.

Mr Diethelm will remain in a senior adviser role into 2022, with responsibility for select legacy litigation cases. He joined the UBS group executive board in 2008.

“With more than 25 years of legal and compliance experience across different industries and geographies, she is ideally suited to lead our general counsel function into the future.” 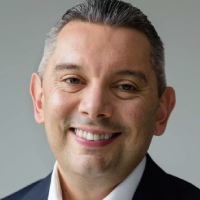