ING Group chief executive Ralph Hamers will be departing the bank at the end of June to take the reigns at UBS.

Mr Hamers is replacing successor CEO Sergio Ermotti, who is leaving the company after nine years.

The new boss will join the UBS board from 1 September for the leadership transition, before commencing in the CEO role from November.

Chairman Axel Weber said he is the right choice to lead UBS into its next phase.

“As the industry undergoes fundamental change, Ralph is the person to lead UBS’s continued transformation and build upon its successful strategy as the world’s largest and only truly global wealth manager and the leading universal bank in Switzerland, enhanced by its investment bank and asset management."

Mr Hamers has worked with ING since 1991. He progressed through a series of roles across business segments, including country manager for Romania and Belgium before becoming CEO in 2013.

UBS reported under his leadership, ING has fundamentally shifted its operating model and is “now considered one of the best examples of digital innovation in the banking sector”.

Meanwhile the outgoing Mr Ermotti was credited with leading the “transformation of UBS in the wake of the global financial crisis”.

“During Sergio’s tenure, UBS created substantial value for our shareholders, as tangible book value including dividend distribution has grown at 6 per cent annually and shareholders have received over US$15 billion dividends and US$1.5 billion in share buybacks,” Mr Weber said.

“We are grateful to Sergio for the strong leadership he provided as CEO of UBS, adding a successful chapter to the history of this more-than-150-year-old bank.”

Mr Ermotti said after nearly a decade at UBS, it is the right time to move on.

“UBS is in great shape, enjoys maximum strategic flexibility and is well positioned for sustainable growth,” he said.

“In the months ahead, my colleagues and I will continue to execute our strategy and deliver against our ambitious targets, and we look forward to working with Ralph to ensure a seamless transition.”

Mr Hamers commented he has long admired the transformation of UBS under the leadership of Mr Weber and Mr Ermotti.

“I’m looking forward to working with the senior management team, the board of directors and all of UBS’s employees to further strengthen the franchise and serve UBS’ clients to achieve their goals,” he said. 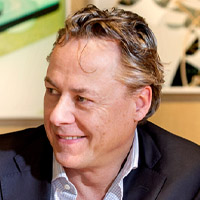